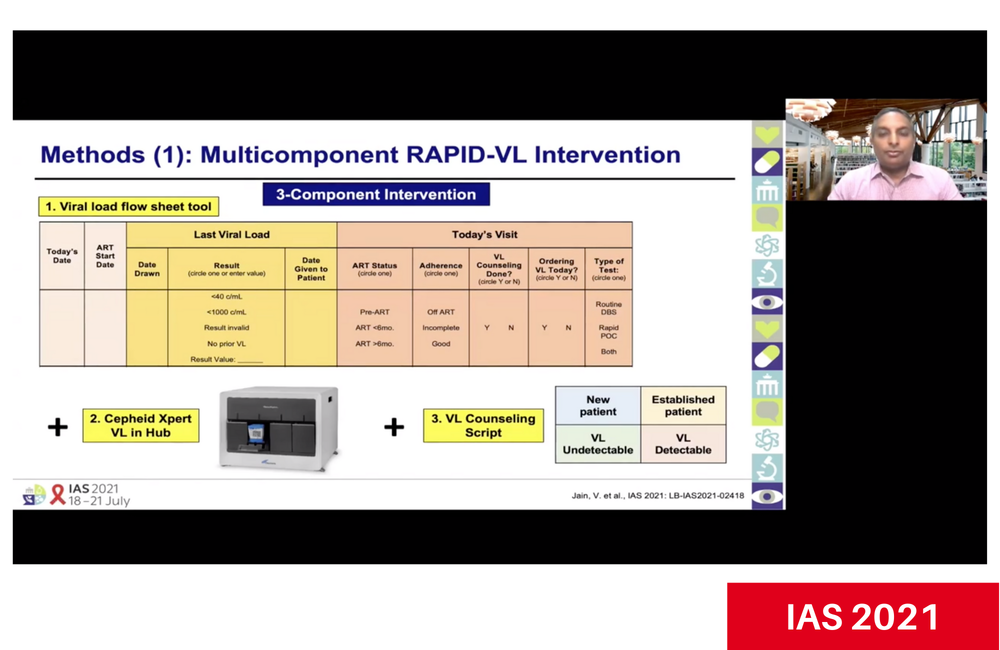 Simple measures to improve the ordering and turnaround of viral load tests in Uganda significantly improved viral suppression after one year, a cluster-randomised trial reported this week at the Eleventh International AIDS Society Conference on HIV Science found.

Although viral load testing is a well-established procedure in Uganda’s national HIV treatment programme, its uptake could be improved. Doctors do not always order viral load tests in situations where national guidelines recommend a test, and turnaround times from ordering the test to delivery of the result to the patient can be up to two months. Delays of this length are especially problematic in pregnant or breastfeeding women or people with detectable viral load who may need to be switched to another regimen to avoid drug resistance.

To test whether improvements in viral load testing procedures translated into better outcomes for patients, Dr Vivek Jain of University of California San Francisco and colleagues designed the RAPID-VL study. The trial tested a package of interventions in a cluster-randomised design, in which 20 clinics were randomised to adopt the intervention package or continue with standard-of-care viral load testing procedures.

Halting of the function or replication of a virus. In HIV, optimal viral suppression is measured as the reduction of viral load (HIV RNA) to undetectable levels and is the goal of antiretroviral therapy.

A group of participants in a trial who receive standard treatment, or no treatment at all, rather than the experimental treatment which is being tested. Also known as a control arm.

By comparing the genetic sequence of the virus in different individuals, scientists can identify viruses that are closely related. A transmission cluster is a group of people who have similar strains of the virus, which suggests (but does not prove) HIV transmission between those individuals.

A drug-resistant HIV strain is one which is less susceptible to the effects of one or more anti-HIV drugs because of an accumulation of HIV mutations in its genotype. Resistance can be the result of a poor adherence to treatment or of transmission of an already resistant virus.

The intervention package consisted of

The study recruited participants from four groups at higher risk of poor outcomes without timely viral load testing (pregnant and breastfeeding women, children and adolescents, people with detectable viral load and people overdue for viral load tests) as well as adults not at high risk.

Read More:  5-2 diet how much protein

The primary study outcomes were time for test results to be delivered to the patient and viral load test ordering that was compliant with guidelines. Outcomes were compared between the year prior to the study and the intervention period (2018-2020) in 1200 people, 60 per clinic. Viral suppression after one year was the secondary study outcome.

Read More:  How to add more carbs to your diet

Asked which components of the intervention package may have the greatest effect, Dr Jain said that the study “cannot disaggregate the components because the intervention was designed to address multiple barriers simultaneously. The viral load availability at a local hub is an enabling technology but the prompt sheet helped encourage the use of the technology.”

He said that other countries should consider adopting the hub-and-spoke model employed in the RAPID-VL study, together with the flowsheet and counselling scripts. Feedback from patients and doctors had been very positive, he said. Moreover, the intervention was sustainable in government-run HIV clinics.