One in two people in the U.S. with employer-sponsored health insurance worry that a major health event in their household could lead to bankruptcy, according to research gathered by West Health and Gallup in Business Speaks: The Future of Employer-Sponsored Insurance. 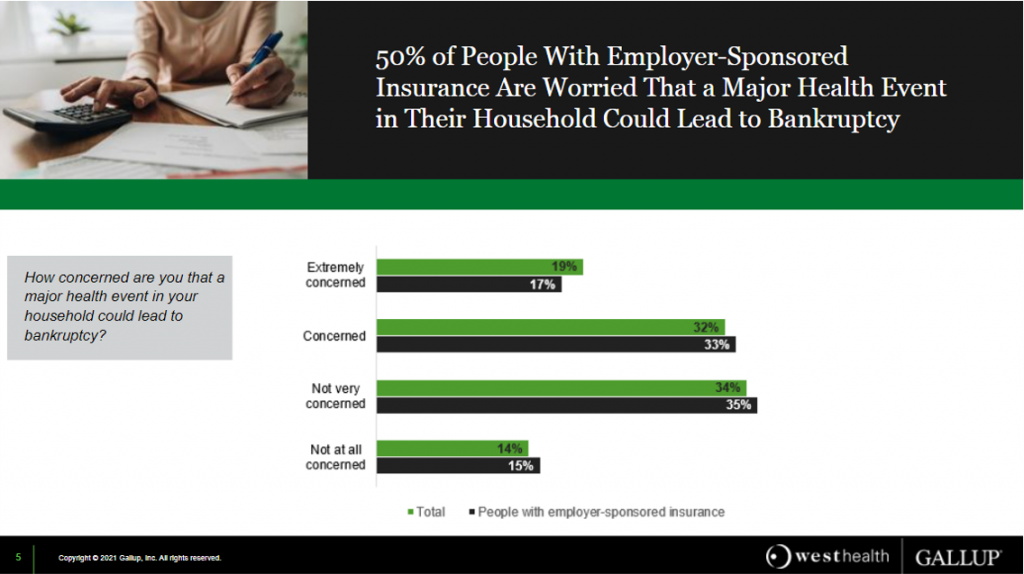 Gallup and West Health presented their study in a webinar earlier this week; in today’s post, I feature a few key data points that particularly resonate as I celebrate/appreciate yesterday’s U.S. Supreme Court’s ruling on the Affordable Care Act (i.e., California v. Texas) combined with a new study published in JAMA Network Open, discussed below the digital fold in the Hot Points.

Even in 2021, we still see so-called “job-lock” with workers staying in jobs that offer health insurance benefits. Gallup-West Health found that overall, 16% (1 in 6) of workers stay in an unwanted job for the health insurance benefits. This varies from 21% of Black workers to 14% of White workers, and those earning under $ 48,000 a year (with 28% staying in an unwanted job for insurance) compared with 10% of people earning $ 120,000 and over. 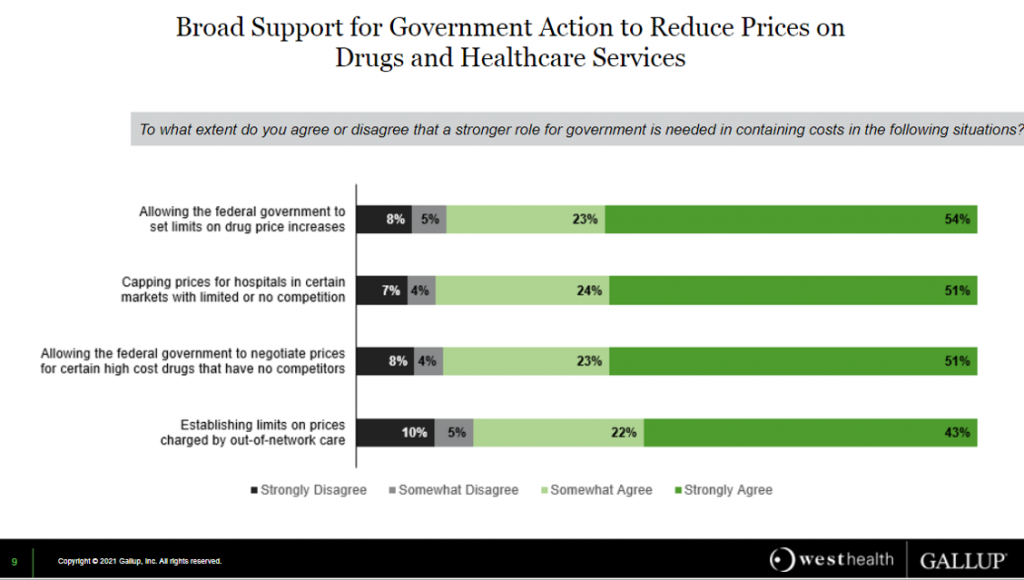 One-half of people “strongly” agreed with allowing the Federal government to set limits on drug price increases or to negotiate prices for certain high-cost drugs that have no competitors, in addition to capping prices for hospitals in certain markets with limited/no competition.

Read More:  What Poor Birth and Maternity Outcomes in the U.S. Say About American Healthcare & “Infrastructure”

Another 23% of consumers “somewhat” agreed with the two drug pricing control strategies, as well.

Gallup and West Health noted that this intensity of support for price regulation was noteworthy in this study.

Health Populi’s Hot Points:   U.S. workers with private insurance more likely report poor access to health care, greater costs of care, and lower satisfaction with care versus people covered by public health insurance plans — whether Medicaid, Medicare, VHA or military coverage. This remarkable finding was reported on June 1, 2021, in Access to Care, Cost of Care, and Satisfaction With Care Among Adults With Private and Public Health Insurance in the US, published in JAMA Network Open.

Why would this be the case, that people insured in commercial/private plans whether employer-sponsored or personally purchased would be so less satisfied with health care (FYI 80% of the study respondents with private insurance were in work-sponsored plans).

It’s important to know that the incidence of medical bankruptcy fell within two years of the implementation of the Affordable Care Act. “The ACA expanded coverage to millions of poor and near-poor families between 2014 and 2016, and the obtaining of health insurance may have staved off financial ruin, perhaps
through a lower accumulation of medical debt,” the study concludes.

Nonetheless, the ACA has not been a panacea ridding Americans of the threat of medical bankruptcy and financial toxicity of health care costs borne by U.S. households. The “Affordable” adjective in the Act’s title has been elusive, and we continue to see a dozen states still not expanding Medicaid to enable health care insurance access to millions of uninsured people. So while we who believe in health care as a civil right and universal health coverage a national objective, we have much work to do to ensure U.S. consumers evolve toward full health citizenship.

As a postscript – on the prescription drug pricing front – watch the line-item in the Gallup-West Health study on driving pricing and U.S. health citizens’ cross-party concurrence for greater regulation. A new poll from STAT looked at the FDA approval process for Aduhelm, the new-new therapy for Alzheimer’s Disease.

Aduhelm is currently has a list price of $ 56,000 for one year of treatment.

The last graph comes from the survey, conducted by The Harris Poll last week (June 11-13, 2021). The lowest line on the chart shows consumers agreeing with the statement, “I believe the drug is priced fairly.” 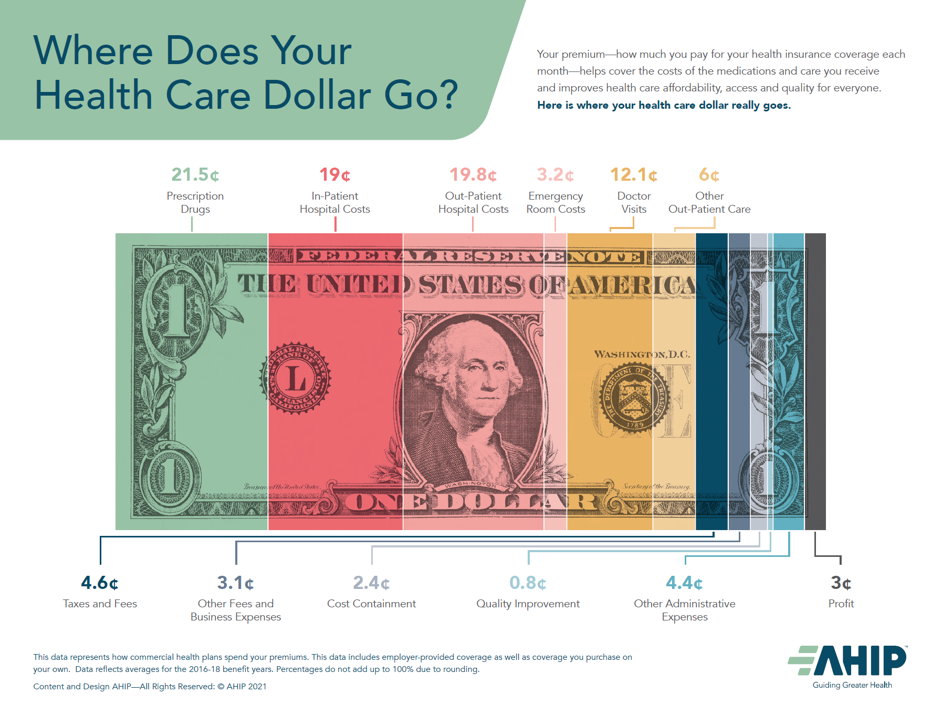 Only 15% “strongly agree” that the drug is priced fairly, and 22% “somewhat” agree. One-third are not sure about the pricing, and 28% disagree with the fair-price statement.

There is in Congress some bipartisan concurrence for drug price regulation evolving. In the post-pandemic era, health care costs are rising in health consumers’ minds and at kitchen tables once again, taking the place they had pre-pandemic in polls on Americans’ top health care concerns. This goes, too, for hospitals with respect to surprise billing and out-of-network costs. Watch for the health care stakeholder lobbies to be lobbing campaigns about the value of spending on hospitals, physician care, insurance, and pharma like this new AHIP report.

Read More:  How to read between the lines of the healthcare data blocking debate