To be clear: Britain and France are unlikely to go to war. But the flare-up is a bizarre chapter in relations between the countries, and a sign of the ongoing difficulties in a post-Brexit world.

For those confused by it all, let’s get you caught up.

I’m not great at geography, please start with the basics.

Jersey is an English-speaking island, about twice the land size of Manhattan, in the English Channel, about 14 miles off the northwestern coast of France.

It is not part of the United Kingdom, but is one of three British crown dependencies, along with Guernsey and the Isle of Man. Jersey is self-governing, with its own legislature and judiciary, but the United Kingdom is responsible for its defense.

Are France and Britain at war now?

No. Jersey’s foreign minister, Ian Forst, clarified that Britain is “absolutely not” going to war with France over the dispute, according to The Independent.

Then why is this a big deal?

Because scrambling naval ships, raising even the slightest specter of military confrontation, is a big reaction to a fishing license dispute.

What led up to this?

It began, as many spats have, with Brexit.

For decades, French crews have fished in the waters near Jersey under long-standing agreements. But last week, under a new trade agreement created after Britain formally left the European Union in January, Jersey introduced new requirements for the French fishing crews, restricting how much they can fish there. 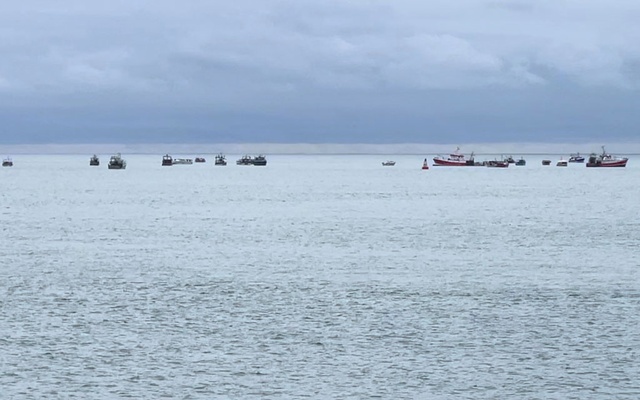 Boats are seen in the only channel that allows access to the harbour, in St Helier, Jersey, May 6, 2021, in this picture obtained from social media. Thomas Meany/via REUTERS

New licenses were issued last week. French officials, accusing Britain of breaking its Brexit agreements, were dismayed; one official warned this week that France could cut off Jersey’s power supply, which comes via underwater cables from France.

In protest, French boats threatened to block access to a port near St. Helier, the capital of Jersey. On Wednesday, Britain responded by dispatching two British navy vessels as a “precautionary measure,” according to Prime Minister Boris Johnson’s office.

On Thursday, France deployed two naval patrol boats to “ensure the safety of navigation” as well as the “safety of human life at sea,” according to a spokesperson for the French maritime authorities in charge of the English Channel.

That’s quite an escalation.

Yes. And the dispute has been played dramatically in much of the British news media, as the lead story in several newspapers and websites, even as politically significant elections played out Thursday.

The British fishing industry has little economic significance but carries substantial emotional, symbolic and, therefore, political weight and was a major sticking point in Brexit talks. Many in the industry, which backed Brexit, thinking they would gain the rights to more fish, felt betrayed when they were forced to share too much of the fish caught in British waters with others.

Some saw the theatrics as entirely unnecessary. Craig Murray, a former British ambassador who said he had negotiated the fisheries agreement in the early 1990s, did not mince words on Twitter.

“I cannot believe how stupid, on every level, it is to send gunboats,” he wrote, referring to the naval ships.