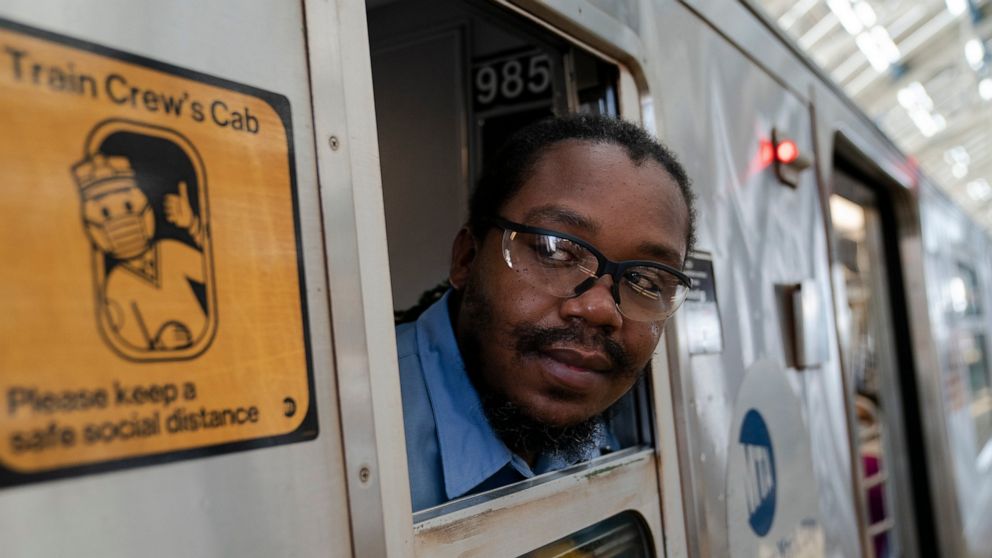 NEW YORK — The early months of the coronavirus pandemic shined a spotlight on essential workers.

As cities shutdown, thank you signs went up on windows and applause rang out each evening for the workers still out there. At the time, there was hope the pandemic would be short-lived.

Instead, the virus spread, evolved and unleashed new challenges.

More than 60% of U.S. workers had jobs that couldn’t be done from home during the pandemic, according to a Pew Research Center survey. Front-line workers struggled with inconsistent masking policies, fought for hazard pay and campaigned for lasting changes, including a $ 15 minimum wage and adequate paid sick leave.

The arrival of vaccines has brought new trials. Labor advocates fought for paid time off and other policies to help give workers access to the vaccines, while confronting reluctance among many to get the shots.

At this latest crossroads, The Associated Press caught up with four of the workers it profiled last year: a nurse’s assistant, a subway driver, a janitor and a warehouse worker.

For all four, the biggest change was getting vaccinated. They have taken tentative steps toward normalcy, hugging family and traveling. But the pandemic continues to define their work and life.

Annette Brown’s boss called her into the office one day a few months ago. He read emails the medical staff had written, praising Brown’s dedication to her job as an overnight janitor at a hospital in Halethorpe, Maryland.

The recognition was hard-won. In the early days of the pandemic, Brown wandered around the hospital in search of leftover N-95 masks because the nurses had priority amid a nationwide shortage. A member of the 32BJ SEIU service workers’ union, she pushed unsuccessfully for hazard pay.

By her count, 11 other janitors at her hospital quit during the pandemic. A single mother of two, Brown couldn’t consider doing the same. For a year, she spent days guiding her children through remote school before collapsing for three hours of sleep before returning to her overnight shift.

This month, she was promoted to supervisor, earning her a $ 2 hourly raise that bumped her pay to $ 17.90 an hour.

“They started showing a bit more respect to the housekeeping staff because they saw us in action and how important our job is,” she said.

Last year, Brown told the AP what she wanted most was a vaccine. She got hers in February but her fears still linger, especially for her children who will start school in person in the fall. Her east Baltimore neighborhood has one of the city’s lowest vaccination rates, at less than 50%, according to Baltimore City health figures.

Brown’s oldest son, 13, is eligible for the vaccine but told her he needs time to think about it.

Transit workers in New York City became eligible for the vaccine in January, but Desmond Hill did not get his until April.

The subway conductor worried “because of how fast the vaccine was created as well as the politics that went into it.” His grandmother and father begged him to get it.

He finally rolled up his sleeve at a station where the Metropolitan Transportation Authority, New York’s mass transit agency, was hosting a vaccination drive.

“The change of heart came from realizing what kind of job I have and what it requires of me as far as being in contact with thousands of people a day,” Hill said.

According to the MTA, at least 171 of its workers have died from COVID-19 since the start of the pandemic, the majority of them people of color. By May, just 40% of employees had been vaccinated. The state government finally required MTA workers to get the shots or face weekly testing by Labor Day. Nearly two-thirds of MTA employees have now been vaccinated.

Employer support has made a big difference in getting workers vaccinated, according to a survey of almost 9,000 service and retail sector workers by Harvard’s Shift Project. For instance, the survey found that 68% of workers who — like Hill — were able to get the vaccine at jobsites were vaccinated. In contrast, less than 40% of workers who had no employee support were vaccinated.

Hill says getting the vaccine has made a “night-and-day” difference.

“Last year, like everyone else, I was afraid of being outside and afraid of being around people, I took lunch breaks in my car,” Hill said. “Now I’m vaccinated and I feel more comfortable.”

He celebrated with a trip to Las Vegas, and best of all, resumed weekly visits with his grandmother.

“She’s sitting right beside me,” Hill said with a laugh. “We had lunch and went on a shopping run.”

It started in March 2020 when she saw social media posts from fellow Amazon warehouse workers demanding more protection from the virus. Brown, who works at an Amazon Fresh fulfillment center in Newark, New Jersey, jumped in after someone dismissively wrote that Amazon workers should just be grateful for their jobs.

Soon, she was recruited by the United For Respect labor advocacy group, and found herself talking to journalists and lawmakers.

It was thrilling for Brown, an exuberant storyteller whose childhood included bouts of homelessness. During a news conference last fall, she made headlines when she threw out the phrase “turkey apocalypse” to describe fears that the holiday season would lead to a surge in infections.

But the slow pace of progress was disheartening. Amazon, for instance, never reinstated the hazard pay that was the key demand of the “turkey apocalypse” news conference.

“It’s one thing to be on the outside of the fight and suffering. It’s another thing to be in the fight. You get your hopes up,” Brown said. “Having no hope isn’t as bad as having hope and repeatedly having it crushed.”

Brown, a Navy vet, got vaccinated as soon as possible at a VA hospital and tried to talk hesitant co-workers into getting the shots. Amazon has held more than 1,100 on-site vaccination clinics. It has also offered bonuses and even a lottery for a car and a $ 500,000 cash prize to encourage its workers to get vaccinated but so far has stopped short of requiring the shots.

Still, the warehouse work itself has taken its toll on Brown, who developed tendonitis and plantar fasciitis over four years on the job. Amazon recently announced that it would ease up on, but not eliminate, its “time off task” tool that dings workers for taking too many breaks, which labor safety advocates have blamed for the company’s injury rates.

At this point, though, Brown yearns for a job that won’t punish her body.

“This is the last physical job I’ll ever have,” Brown said.

Linda Silva hasn’t regained her sense of smell more than a year after contracting COVID-19 while working as a nurse’s assistant at two hospitals in New York. But she’s grateful be alive.

A doctor reminded her, ”A lot of people lost their lives, all you lost is your smell,’” she said. “Now, I’m moving forward.”

A study by Kaiser Health News and the Guardian found that more than 3,600 U.S. health care workers died of COVID-19 during the first year of the pandemic, two-thirds of them people of color. That study also found that nurses and support staff such as Silva were more likely to die than physicians.

After hurting her arm in October, Silva switched jobs to become a contract administrator for her union, 1199 SEIU United Healthcare Workers East. She’s not alone: Hospitals across country have struggled to retain staff.

Silva got vaccinated as soon as she could in January.

At the time, hospitals, nursing homes and clinics ran into surprising resistance to the vaccine from workers, an ongoing challenge that has prompted a growing number of local governments to impose mandates. About a quarter of health care workers in New York remained unvaccinated when the state government imposed a mandate for them in mid-August.

For Silva, the vaccination has brought joy. For weeks at the beginning of the pandemic, she avoided hugging her husband and two sons. Instead, they would put their arms around themselves each day and and say, “I love you.”

By May, the rest of her family was vaccinated and celebrated with a trip to Kissimmee, Florida.

“It was our first time going out and doing something — it felt great to be able to get out there,” she said. “I want to let people know it is very important to take the vaccine. We can get back to more normalcy.”

Follow AP coverage of how the coronavirus pandemic is transforming the economy at: https://apnews.com/hub/changing-economy